Associate Professor of History
Dean of Arts and Sciences 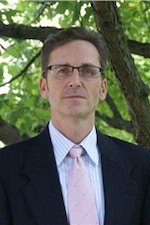 Originally from northern Wisconsin, Crubaugh has also taught at Columbia University, Barnard College, and Connecticut College. He was Chair of History 2009-17 and Co-Director of European Studies 2015-18.

Crubaugh specializes in 18th-century European history and teaches courses on the Enlightenment, the French Revolution and Napoleon, Western Civilization since 1500, Early Modern France, Atlantic History, and Europe in the Age of Revolutions.

18th-century European history, with a particular emphasis on social history, the peasantry, and religion in the French Revolution.

Office of the Provost and ISU University College
2018

Office of the Provost and ISU University College
2017

Office of the Provost and ISU University College
2016

Review of Rafe Blaufarb, The Great Demarcation: The French Revolution and the Invention of Modern Property for H-France Review 17 (August 2017): 1-5
Review of Albert Hamscher, The Royal Financial Administration and the Prosecution of Crime in France, 1670-1789 for H-France Review 14 (March 2014): 1-7
Review of David A. Bell, Napoleon: A Concise Biography in History Teacher (in press)
Review of Rafe Blaufarb & Liz Clarke, Inhuman Traffick: The International Struggle against the Transatlantic Slave Trade: A Graphic History in History Teacher (in press)

"Less Law for the Rule of Law: The Institution of the Justice of the Peace in the French Revolution" at The Rule of Law in an Era of Social Change: Security, Social Justice, and Inclusive Governance conference, Athens, Greece, June 2014
Comment for panel on “Church and State in Revolutionary and Nineteenth-century France” at the French Historical Studies conference, Cambridge, MA, April 2013
Peasants into Swiss Men: National Histories in La Feuille vilageoise during the French Revolution at the Midwest American Society for Eighteenth-Century Studies conference, Madison, WI, October 2012