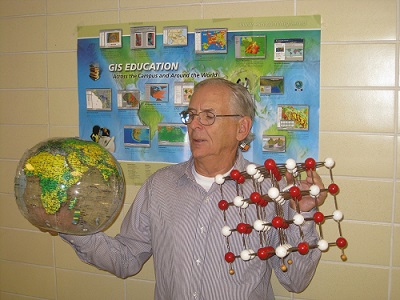 Dr. James R. Carter, Professor Emeritus of Geography-Geology, holds a B.A. in Geology from Indiana University (1958), an M.A. from the University of Maryland (1966), and a Ph.D. from the University of Georgia (1973). His doctoral dissertation focused on mapping drought in the southeastern United States, and during his studies he participated in an NSF Tropical Studies Program in Atmospheric Sciences. After earning his bachelor’s degree, he began working for the Indiana Water Resources Commission. He subsequently worked in the Geographic Names unit of the Topographic Mapping program of the U.S. Geological Survey from 1962 through 1968. Upon the completion of his doctorate, he accepted a position at the University of Tennessee in Knoxville, where he taught the atmospheric science and cartography courses. In 1990 he came to Illinois State University as Director of Academic Computing, with faculty status in the Department of Geography-Geology. In December 1991 he taught the first course on campus introducing something called the Internet. He also worked with the College of Arts and Sciences to create LILT, the Laboratory of Integrated Learning and Technology.

Dr. Carter is the author of numerous books and articles. In 1984 his book Computer Mapping: Progress in the 80’s was one of the first works on the topic. His interest in weather and maps resulted in three pieces in Volume 6: Twentieth-Century Cartography. Although he officially retired in 2005, he continues to do research and publish his findings. He is particularly well-known for his work on ice flowers, and in 2013 his research and photos appeared in American Scientist—an article that has been reprinted in three other languages!

He and his wife Diane began their married life in 1960. For three years he served as Chair of the ISU Senior Professionals Board, an organization that involves many CAS faculty through its Academy of Seniors and Mornings with Professors programs—the first ISU retiree to have that title since Dean Charles Bolen founded the organization in 1989. 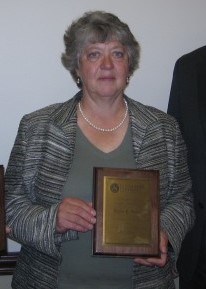 Colonel (Retired) Denise K. Vowell, U.S. Army, is an honors graduate of Illinois State University and the University of Texas School of Law (J.D., 1981) and a distinguished graduate of the Industrial College of the Armed Forces (M.S. in National Resource Strategy, 1998). She enlisted in the Army in 1973 while an undergraduate at Illinois State and received a direct commission in the Women’s Army Corps (WAC) in 1974. After serving as a Military Police officer, she was selected for the Army’s funded legal education program. While an Army officer, she served as a tort litigation attorney, prosecutor, defense counsel, chief legal officer, and as both a trial and appellate judge. She retired from the Army as the Chief Trial Judge in January, 2006. She was the first woman to serve in that capacity. Colonel Vowell was then appointed as Special Master, U.S. Court of Federal Claims, on February 1, 2006. She was designated Chief Special Master by the court effective September 19, 2013.

She is the author of articles appearing in the American Journal of Criminal Law and Military Law Review, as well as numerous published and unpublished opinions as an Associate Judge, U.S. Army Court of Criminal Appeals. She was a frequent guest lecturer on trial advocacy, evidence, and procedure at the Army’s Judge Advocate General’s Legal Center and School.
She is a member of the National Association of Women Judges and has served as chair of the Military Courts committee. For many years she advised a Senior Girl Scout troop and an all-girl Boy Scout Venturing Crew in the Bailey’s Crossroads area of Northern Virginia, where she resides. She is an avid backpacker and is currently in the process of thru-hiking the Appalachian Trail.
2019-12-12T09:33:05.615-06:00 2019
OU Login