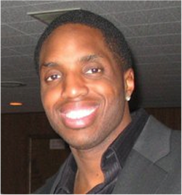 Maj. Kwame Curtis currently serves as the Executive Officer for the 59th Medical Wing Commander, and Deputy Director of the San Antonio Military Health System (SAMHS), whose mission is to provide deployed and home station health care, graduate medical education, and clinical research, all designed to enhance Air Force readiness. The 59th is the Air Force's largest medical wing, composed of seven groups with a staff of 6,010 military, civilian, contract employees, residents, and students. Kwame supports the Deputy, who manages a $1.2 billion budget providing health care for over a quarter of a million beneficiaries in 10 medical treatment facilities in the San Antonio metro area.

Prior to his selection as the Executive Officer, Maj. Curtis was Deputy Director of Educational and Developmental Intervention Services (EDIS), 31st Fighter Wing, Aviano Air Base, Italy. The EDIS mission is to maximize the potential of children who are identified or at risk for any and all educational delays, and intervene at a multi-disciplinary level. As the sole military audiologist in Italy, he delivered services to 9,200 beneficiaries, while directing a $240,000 inventory (doing more with less) for pediatric patients at six geographically separated units that included Slovenia, Austria, and Turkey. He also initiated an in-flight earplug program for two fighter squadrons, ensuring quality combat communication for 71 fighter pilots. Outside of the clinic, Maj. Curtis was passionate about process improvement, as he was handpicked to lead a 14-member team to centralize procedures in the entire medical facility. This resulted in decreased patient wait time by 50 percent and increased medical technician availability to patient care by 57 percent.

Major Curtis received a doctoral degree in Audiology from the University of Florida in 2008. Prior to that he graduated from Illinois State University in 2000, and received a Master’s of Science degree in Audiology in 2002. That same year, he was competitively selected into the Air Force to continue his fellowship. During this time, Maj. Curtis became a champion of outcome measurement, involved in targeted research and numerous presentations on improving clinical validity. In 2003, he took over his first clinic as Chief of Audiology Services at Offutt AFB, Omaha NE. While there he pioneered a brand new vestibular clinic, reenergized the Hearing Conservation program, supervised the Newborn Hearing Screening program and was preceptor to family practice physicians, otolaryngologists, and audiology doctoral students. He also served as adjunct faculty at the University of Nebraska-Lincoln. For his efforts he was awarded the Air Force Audiologist/Speech Pathologist of the Year. In 2006, Maj. Curtis was selected for an assignment to Scott, AFB, IL as a flight commander. He again trail blazed and outfitted a new balance clinic ensuring preemptive care for the Air Force’s largest Air Mobility Command and the 950 aircrew assigned at any given time. Working closely with ENT, he built a successful, more efficient protocol for sudden hearing loss. In addition, he managed the USAF Hearing Conservation Program for 15 sites in 8 states. Honored as an invited lecturer at Washington University, he also was a military liaison to the medical school for innovative tinnitus research, which soon could result in deployable objective treatment of tinnitus (the #1 reimbursement from the Veterans Administration and tax payer dollars). In 2008, Kwame’s efforts were recognized within the military as well as in the private sector and he was, again, selected as the Air Force Audiologist of the Year, began mentoring for the University of Florida’s Doctoral program, and invited to attend and present at the prestigious Jerger Future Leaders in Audiology Conference. Maj. Curtis has served on the Board of Directors for the Central Institute for the Deaf, is a fellow and committee member of the American Academy of Audiology, and has been an executive member of the Veterans Administration/Military Audiology Association.

This summer, Maj. Curtis will be moving (once again) to the Hearing Center of Excellence in San Antonio, TX, whose mission is to heighten readiness and health through congressional legislation focused on prevention, diagnosis, mitigation, treatment, rehabilitation, and research of hearing loss and audio-vestibular system injuries. The HCE was established by the Secretary of Defense to create a registry data and to utilize it to encourage and facilitate joint research, development of proven practices, and clinical research.

In 2002, Kwame found Christy (Jayne) in San Antonio, who is a graduate of Trinity University (B.A.) and University of Mississippi (Ph.D.). Blessings come to those who wait, as they were married in 2008. Christy is a clinical child psychologist and mother to Sadie Jayne (3) and James Drake (11 months). Maj. Curtis wishes to thank all of his family and friends for their constant and unconditional support over the years, and to everyone who has sat down with him and given him their thoughts, good or bad… he has used them. He especially wants to thank the Gaston family, the Jobin family (particularly Terry and Kathy), the Jayne family, Toyee McGee, his late mother Jewell Curtis, and his invincible wife Christy.

Dr. Kaminski is the editor, co-editor, or associate editor of 52 books, including the 26 volumes of The Documentary History of the Ratification of the Constitution. He has also published 50 articles in books, historical journals, and law reviews. He was the co-author of a ten-part series on the Bill of Rights that appeared in the Milwaukee Sentinel in 1991 and co-authored two weekly syndicated newspaper series on the Constitution that appeared from February 1987 through June 1988. One of these series was subsequently published as a book. About 50 entries written by him have appeared in more than a dozen encyclopedias, including the Encyclopedia of the American Enlightenment (2012),U.S. Civilian and Military Leadership (2009), and Milestone Documents in American History (2008). He has been a guest scholar on Wisconsin Public Radio’s University of the Air 28 times.

For over twenty years he directed a judicial education program for both Wisconsin and federal judges, giving over 100 one-day seminars throughout the country emphasizing the historical, political, economic, legal, and philosophical origins of the U.S. Constitution. For over ten years, he held a visiting faculty position at the National Judicial College in Reno, Nevada, where he regularly participated in seminars for state, military, native American, and foreign judges.

Over the course of his distinguished career, Dr. Kaminski has delivered more than 100 papers at conferences, conventions, and symposia. He regularly speaks at local and statewide service clubs, retirement centers, and elementary and middle schools. He has written many book reviews and has often refereed manuscripts for historical journals and university presses. He has also refereed grant applications for federal government agencies. He is a member of numerous professional associations, including the Organization of American Historians, the Society for Historians of the Early American Republic, the State Historical Society of Wisconsin, and the Association for Documentary Editing. He served as secretary-treasurer of the Association for Documentary Editing from 1982 to 1985 and as president of that organization from 1986 to 1987. In 2010, the organization presented Dr. Kaminski with its Julian P. Boyd Award, the highest award presented by the ADE, which is presented every three years to a senior scholar in honor of a distinguished contribution to the study of American history and culture. He is a fellow of the Massachusetts Historical Society.

As a graduate student at ISU, Dr. Kaminski met Janice Westaby in October 1966. They were married eleven months later. They have two children—Steven, an accountant, and Laura, an urban planner for Oakland, California. Steven, his wife Lynn, and their two sons Alexander and Nicholas, live in Sun Prairie, Wisconsin; while Laura lives in San Francisco. Jan served as the day-care provider for their two grandsons as they grew up.