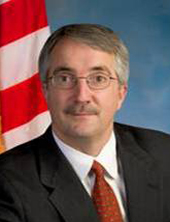 Dwight E. Adams became the first Director of the University of Central Oklahoma Forensic Science Institute on July 2, 2006. The institute will lead continuing education in forensic science for professionals and enhance UCO’s undergraduate and graduate forensic science program. Adams recently retired from the FBI after serving as Director of the FBI Laboratory in Quantico, Virginia. The FBI Laboratory consisted of 700 scientific, technical and response personnel and an operational budget of more than $100 million.The FBI Laboratory is the largest and most complex laboratory of its kind in the world.

In 2003, he was the recipient of the Presidential Rank Award as Distinguished Executive, the highest award given in the Federal government. Adams was a member of the FBI’s research team that developed the DNA techniques first used in 1988. He has testified as a DNA expert in federal, state and local courts for the prosecution and defense in excess of 130 times. He also served on the national DNA Advisory Board responsible for creating standards governing all DNA testing crime laboratories in the United States and was a member of the Attorney General’s National Commission on the Future of DNA Evidence.

Adams oversaw the creation of the National DNA database linking 175 crime laboratories and responsible for solving or aiding more than 30,000 cases nationwide. After earning his B.S. in Biology at the University of Central Oklahoma, Adams received his M.S. in Biological Sciences from Illinois State University. He received his Ph.D. in Botany from the University of Oklahoma in 1982. He is the author of numerous scientific publications, mostly in the field of DNA technology applied to human identification.

After earning her B.A. and her M.A. at Illinois State University, Leslie A. Bertagnolli earned her Ph.D. and her J.D. at the University of Illinois. She is an attorney in the firm of Baker & McKenzie in Chicago, where she practices intellectual property law and manages the firm’s Intellectual Property practice in various capacities. Her responsibilities have included serving as Baker & McKenzie’s Chair of North American Intellectual Property Group in 1998-99 and the North American Representative to Global IP Steering Committee from 1999 to 2006.

Bertagnolli has also served as the Chicago Bar Association’s Chair of Architecture and the Law Committee of Young Lawyers Section, Chair of the Symphony Orchestra Committee, and Chair of the Patent, Trademark and Copyright Committee. In 1992 she received a Distinguished Service Award from Chicago Volunteer Legal Services. Bertagnolli served on the Illinois State University Foundation Board of Directors from 1994 to 2006 and currently serves as Chair of the College of Arts and Sciences Chicago Advisory Board.

Originally from Chenoa, Illinois, LaDonna Carlton is the founder and CEO of Citizens Research LLC. She helped establish the field of litigation consulting. Previously she was Vice-President of the Chicago office of Decision Quest and was the founder of Carlton Trial Consulting, where she was CEO for fourteen years.

Her professional experiences have included advertising sales and management at both the Chicago Sun Times and Where magazine. She is a member of the American Society of Trial Consultants, and she hosted its 1996 conference in Chicago. Carlton is also a member of the Advisory Board of the Global Medical Foundation and has worked as a photographer on missions to Colombia and Romania and plans to participate in missions to Morocco and Ghana in 2007. She currently serves as a member of the Illinois State University College of Arts and Sciences Chicago Advisory Board.

Patrick Cotter is a Partner in the law office of Arnstein & Lehr LLP in his hometown of Chicago. He has worked as an Assistant United States Attorney in New York, where he was one of the trial prosecutors in United States v .John Gotti, et.al. He has substantial experience handling a wide range of matters in the area of criminal defense, including actions under the Racketeer Influenced and Corrupt Organizations Act (RICO), tax matters, internal corporate investigations, appellate and post-conviction work and international criminal law.

He earned his J.D. from New York University School of Law in 1982 and has taught criminal law related courses as a full-time faculty member and as an Adjunct Professor at the Chicago-Kent College of Law, DePaul University School of Law, the University of Montana School of Law and University College Cork, Ireland, Law Department. Cotter received the United States Attorney General’s Distinguished Service Award for his work as a trial prosecutor in United Statesv. John Gotti, et al. In 1992-93, he was a consultant to the United Nations Special Rapporteur investigating allegations of war crimes in the former Yugoslavia.

He has since been appointed by the International Tribunal on the former Yugoslavia to its Panel of Appointed Counsel. He is a member of the National Association of Criminal Defense Attorneys and the American Bar Association and its Sections on White Collar Crime, Criminal Law and International Criminal Law. Cotter has also appeared as a legal commentator on numerous television and radio programs including “Nightline,” National Public Radio, Court TV and the National Geographic Channel’s “Final Report: Getting Gotti.” Cotter is the current Chair of the Illinois State University Attorneys Advisory Board and a member of the Chicago Advisory Board.

The Asset Allocation Strategies Group also assists clients in developing their long-term asset allocation policies. He is a frequent lecturer at industry conferences on issues related to asset policy. Elliott is a member of the firm’s Global Equity, Global Bond, and Global Balanced Strategy Groups. Prior to joining Wellington Management in 1994, he worked at Callan Associates, where he was the Head of Quantitative Consulting from 1990 to 1993. After earning his B.A. in Economics and Sociology, with honors, from Illinois State University, he received his M.A. in Economics and Statistics from the University of Illinois in 1989. Currently, Elliott serves as a member of the Illinois State University Economics Advisory Board.

Glenda Hill Gentile is the Director of the Office of Undergraduate Research at the University of Arizona, where her responsibilities include coordinating and enhancing undergraduate research programs for the College of Science. Previously, she served as a Research Associate and Genetic Toxicology Laboratory Manager for the Department of Biology of Hope College in Holland, Michigan, where she conducted genetic toxicology research and laboratory management, including undergraduate student supervision and training.

At the Yale School of Medicine, she conducted research involving skin cancer mechanisms. In 1973-1974, Glenda was a teaching assistant in Microbiology at Illinois State University, where she was responsible for laboratory instruction for general microbiology. As an undergraduate at ISU, she worked for Dr. Marcia Miller-Hjelle and took independent credit hours for a research project in her laboratory. Gentile was also a student in the Biology master’s program prior to beginning her work at Yale. She has been a member of the American Society for Microbiology and is currently an active member of the Environmental Mutagen Society (EMS), which she has served as a member of the program committee, the membership committee, and the current EMS Council. She recently worked as a member of the local organizing committee for the 7 th International Conference on the Mechanisms of Antimutagenesis and Anticarcingogenesis.

James Gentile is President of Research Corporation, a foundation for the advancement of sciences. Previously he held an endowed professorship in biology and served for twelve years as Dean for the Natural Sciences at Hope College in Holland, Michigan. He spent two years in postdoctoral studies in the Department of Human Genetics at Yale School of Medicine before assuming his position at Hope College.

His research has focused on the role of metabolism in the conversion of natural, and xenobiotic, agents into mutagens and carcinogens. He and his colleagues were the first to define the unique processes through which plant systems use their unique biochemistry to metabolize agents into carcinogens that can affect humans, and his current research investigations are targeted towards gaining an understanding of the role of chronic inflammation in mammals and cancer causation. Among the many awards he has received are the Medallions of Scientific Achievement from the National Cancer Institute of Japan and from the Provincia Di Pisa, Italy; the Alexander Hollaender Research Excellence Award from the Environmental Mutagen Society; and has been named an American Association for the Advancement of Science Fellow.

During his career he has had the opportunity to work with over 120 undergraduate students in collaborative research in his laboratory and has authored more than 100 research articles, book chapters, book reviews and special reports in areas of scientific research and higher education. Gentile holds a B.S., an M.S., and a Ph.D. in Biological Sciences from Illinois State University.

Steven H. Graham is the Director of Strategic Investments at Caterpillar, Inc., the world’s leading manufacturer of construction equipment, which is headquartered in Peoria, Illinois. In his current position, Steve leads Caterpillar’s mergers and acquisitions department. His most recent assignment in Europe was from 2000 to 2005, when he served as General Manager of European Shared Services based in Geneva, Switzerland. In that role he led the European Shared Services Group, a department of 400 people providing support to Caterpillar’s European operations in areas such as Information Technology, Economics, Accounting, Tax, Treasury and Public Affairs.

Prior to that assignment, Steve served in a variety of Commercial Manager and Business Manager roles in the U.S., Belgium, and Switzerland. He is a former member of the Board of Directors at the American International Club in Geneva, Switzerland and is a supporter of Habitat for Humanity and the Peoria Rescue Ministries in Peoria. Steve currently serves as a member of the Illinois State University Economics Advisory Board.

Virginia Lee Owen is Emerita Professor of Economics at Illinois State University. A native of Harrisburg, Illinois, she was raised in Bloomington and graduated from Bloomington Public Schools. After receiving her B.S. with High Honors in Mathematics, she received her M.S. and Ph.D. in Economics from the University of Illinois.

She also holds a certificate in Urban Economics from the Massachusetts Institute of Technology. Owen has served Illinois State University in a wide range of roles—Professor of Economics (1964-1998), Chair of the Department of Economics (1978-1981), and Dean of the College of Arts and Sciences (1982-1993). She also served ISU as the Interim Director of the Center for Economic Education from 1994 to 1997. Her professional activities have included stints as Great Lakes Regional Director of the Association for Cultural Economics, Trustee of the Economic and Business Historical Society, Board of Editors of the Journal of Cultural Economics, and Board of Directors of the Association for Cultural Economics International.She was one of two U.S. members elected to the first International Board.

Over the course of her career she has co-authored/edited 11 books/monographs /manuals, authored/coauthored 21 journal articles, and authored/coauthored more than 30 professional papers presented to professional associations. Owen continues to teach one course each year as an adjunct professor at Illinois Wesleyan University. She is the current Chair of the College of Arts and Sciences Emeritus Faculty Advisory Board.